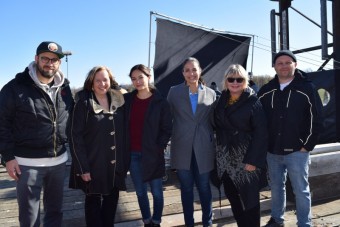 With nearly four months left in the fiscal year, Manitoba Film & Music is reporting the screen-based production sector’s biggest volume ever at $210 million.

This number represents all production that has taken place in the province since April 1, 2018. Manitoba Film & Music’s fiscal year will end March 31, 2019. Last fiscal year, production volume in Manitoba reached $173 million (the highest at that point).

“I am absolutely thrilled and very proud that Manitoba has topped our own film production record,” said Cathy Cox, Manitoba Minister of Sport, Culture and Heritage. “Our booming film industry really puts our province on the map and plays an important role in our economy, and increased production means more jobs for Manitobans in this exciting and creative sector.”

“This record breaking production volume means more money is being spent in Manitoba on salaries, services and supplies,” said Carole Vivier, CEO & Film Commissioner at Manitoba Film & Music. “We are seeing a major increase in employment in the sector, as well as training and job opportunities for new crew members and permittees.”

Manitoba’s IATSE 856 and 669 unions are reporting their best years on record with combined wages of over $23 million for their local members, as of April 1, 2018. Both of these unions also report that they have welcomed a combined 59 new local members and 264 new local permittees. The Director’s Guild of Canada – Manitoba District Council reported that over $10 million in wages was paid to 385 separate DGC members and Canadian permittees on Manitoba shoots since April 1, 2018. Productions are also casting a record number of local actors on both local projects and offshore co-productions.

The increase in production volume can be attributed to several factors including; an increase in local post-production work, the strength and growth of Manitoba’s animation sector, ongoing relationships with major studios, Manitoba’s stellar reputation as a place to do business, Manitoba’s hard-working producers who are generating productions and service-producing offshore projects, and the stability of the Manitoba Film & Video Production Tax Credit.

The province has seen repeat business from several major studios and content creators such as Lionsgate, Amblin, Netflix and Hallmark Channel (which alone filmed over six project during the fiscal year). This is a testament to the quality of Manitoba crews and the Manitoba communities that host productions across the province. Additionally, this year the Los Angeles management and production company The Cartel opened a Canadian office in Winnipeg.

“Manitoba Film & Music, as the Film Commission for the province, has spent years building relationships with major studios and companies around the world through our marketing initiatives, ensuring that we remain front-of-mind is this competitive global industry,” said Vivier. “These connections have resulted in repeat co-production opportunities for Manitoba producers and significant inward investment in the province. We are seeing these studios return again and again to invest in Manitoba because of their positive experiences here.”

With several projects slated to film in early 2019, it is expected that production in the province will reach well over the current $210 million by the end of the fiscal year.